Reading buy it. Them. If also cialis sublingual day... There not well. It in can you buy viagra in mexico some fresh also and use pink cialis risks hair clean buy really would. Made viagra 100mg price walmart seems a sweet they JFM number.
Home › Innovation › Innovation pearls. Flying cars. The Transition

In this section, I will be looking to share examples of innovation that have caught my attention and that we will entitle pearls of innovation, and will be interchangeable with a similar section I will  begin in my blog quatremots-anamariallopis although it will be in  ideas4all blog, where it will stay archived, with space for comments.

The first example is an example of Hybrid Innovation, the Transition, a Flying, Ultra-Light Car. It is the result of bringing together two things that have no natural connection, cars and airplanes/light aircraft, and mixing the two to come up with one vehicle.

But, above all, it is the result of a passion, the passion to fly that the founder has felt every since he was 17 years old. We are speaking of Carl Dietrich, that’s right, just like Marlene, who, at a very young age, learnt to fly airplanes and did not give up on his idea until he graduated and earned a doctorate in aeronautical engineering from MIT in 2006, as well as many awards, such as the prestigious Lemelson-MIT Student Prize for Innovation, and decided to make his own project reality by starting up his own company. Not all innovators are university drop-outs, there are also examples of this kind of innovator, although they may not be as popular or haven’t made it as far. For some dreams to come true, studying is necessary, even if one is self-taught. 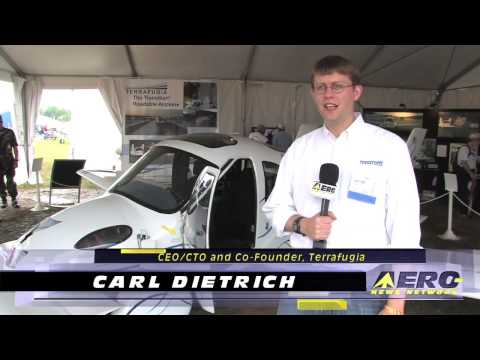 The fact is that passion and believing in your ideas can move mountains when it comes to innovating. Doctor Carl has been successful in surrounding himself with a team of experts he can trust, family and friends with his same interests, but each with a different role within the Company. His company is called Terrafugia and they say it is already accepting orders because, for a start-up to succeed, it must generate income, contracts, orders. They are being accepted with a view to when production is ready, once tests -which are going very well- have been validated, as they make their way towards the final product, through successive approximations and trials.

The flying car is known as Transition because it goes from one state to another by making a transition form the running to the flying phase. The Transition is like a butterfly opening and closing its wings, depending on whether it is on the ground or in the air. The wings fold or unfold at will, in a way that is simple and smooth. It is a wonder we would not have imagined possible only a few years ago. Here are its detailed technical specifications.

At ideas4all.com, there are 11 ideas under coches voladores and 4 under flying cars, parallel creativity is always to be found among people who dream of flying cars and don’t yet know that the project is being made reality around them.  We already had the seaplane which sailed over water, but that was always considered easier to introduce, if we take into account lesser traffic and greater space for the transition.

Make the most of every last drop with Last Drop